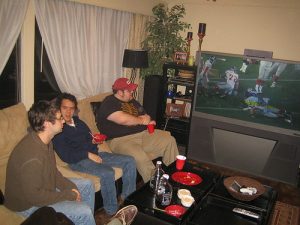 A new study shows that the Super Bowl can be deadly. When analyzing data from the last three decades of Super Bowl Sundays, it was discovered that 15 percent more people died in LA during the two-week period after the Rams lost an intense match against the Pittsburgh Steelers than the same period when the local team wasn’t playing. Also, there was a 22 percent increase in deaths. A similar study of the 2006 World Cup found that there were twice as many cardiac emergencies in Germany when their team played.

Some people say it’s the excitement and emotional stress that drives up the heart rate and blood pressure of sports fans. However, others aren’t so convinced.  Stanford Cardiologist Dr. Dipanjan Banerjee explains, “Jumping up and down and high-fiving is probably good, because at least you’re getting some physical activity. It’s the bad behaviors — the eating nachos and pizza and drinking too much — that need to be avoided.”

We are open and conducting weight loss programs virtually by phone, email and zoom during the pandemic.

We are also conducting sessions in person outdoors in NYC weather permitting.

All programs are discounted by 20% during the Covid-19 pandemic and until further notice.
Call or email us for more information.